Our Resort Hotel Neuhaus in Mayrhofen is a place where sustainability is lived and history is felt. Where every day is full of experiences and where rest and relaxation are part of your holiday. Here you are welcome to look even further - to the peaks of the mountains, which are all just a hike or bike tour away – and where you reside very close to the two legendary ski mountains Ahorn and Penken. You can enjoy the unobstructed view of the Zillertal mountains while strolling through our garden, from the balcony of your room, suite or apartment or while slowly swimming in our natural lake. Our Gasthof & Resort Hotel Neuhaus in Mayrhofen in the Zillertal – one of the Alpendomizil Neuhaus - is a home where nature and history meet and combine to create a diverse and varied holiday world. A place that belongs to Mayrhofen like the mountains belong to the Alps. Where centuries of Tyrolean history can be felt in every room, every parlour and under every ancient fruit tree. 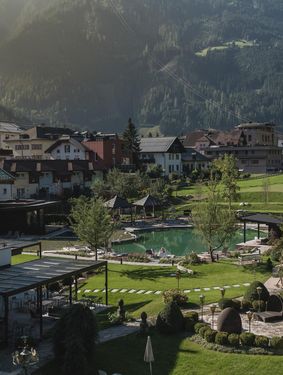 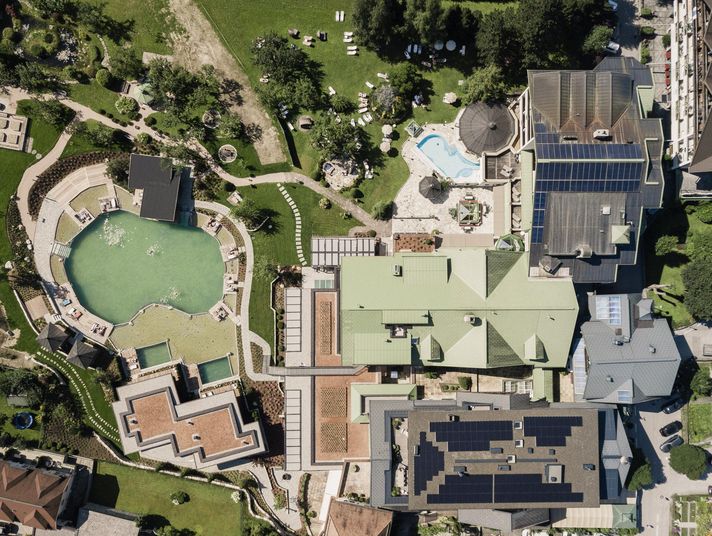 Here you will find the rooms and suites Bergblick and Wiesenblick. Connected underground to the main house.

A refuge of alpine mountain nature in the middle of our garden.

Nearby is our Adults-Only sister hotel with a luxurious wellness world.

Many of the ingredients that we refine in our restaurant grow and thrive here.

Feel-good rooms with a view of the garden and mountains in the heart of Mayrhofen.

Here you can watch our herbs, vegetables and flowers grow.

Everything you need for bathing and refreshing in our natural bathing lake is here.

Fit on holiday – no matter the season: our fitness studio Village Gym.

Alpine living in the midst of the natural world of the Tyrolean Alps. Directly opposite the main house.

A house full of rooms that harbour a very special attitude to life. Surrounded by adventure mountains.

Discover culinary highlights in the garden restaurant with a view of the natural bathing lake.

Where unforgettable holidays in the Zillertal begin with a smile.

True to the origin: The place where it all began.

lofts by the lake

Private garden lofts with their own sauna and natural pools for very special moments.

The home of the Resort Hotel Neuhaus is your starting point for fun on the slopes, mountain bike adventures and hiking pleasure.

The most active valley in Tyrol: fresh mountain air, sporting highlights, alpine experiences and in the middle of it all your Resort Hotel Neuhaus.

From the first moment you enter our Resort Hotel Neuhaus through the traditional entrance, you can feel the history that is evident in many of the details of our house, like the annual rings of a tree. On the façade above the entrance you will read the original lettering from back when our house was still known as Gasthof Neuhaus in the Zillertal. Even earlier, much earlier, in 1649, the house with the farm name Neuhaus was an agricultural business that included a farm, an inn and the local post office. For a long time, long before Alpine tourism took off in the middle of the 19th century, the Neuhaus inn was the meeting place and centre of Mayrhofen. Then, with the construction of the Penkenbahn in 1953/54, the Gasthof Neuhaus soon became a hotel – a pioneer in Mayrhofen and the whole Zillertal. 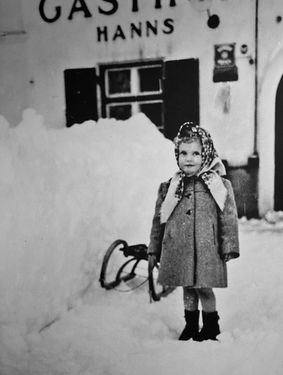 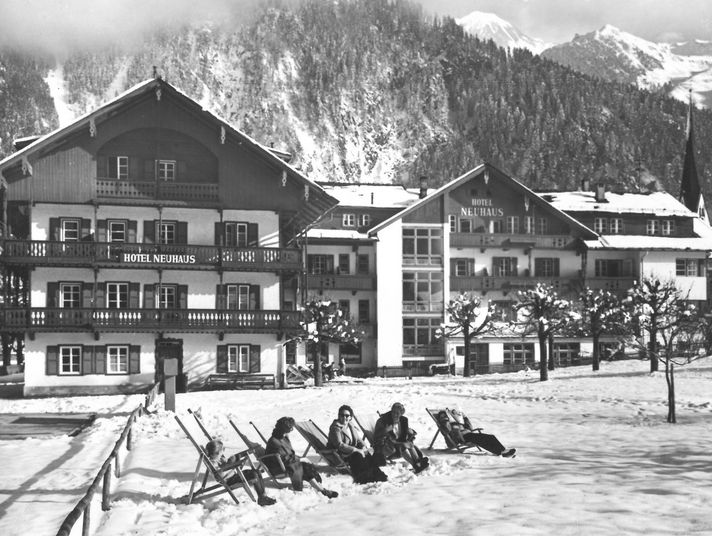 Long before Gasthof Neuhaus in the Zillertal welcomed its first guests, we ran a farm here, as was customary at the time. And it still exists today: our own farm. This includes alpine meadows, which you are welcome to visit during your holiday in Mayrhofen, streams with alpine trout, vegetable gardens and a rich livestock. Why not visit our cows in the Stilluptal valley? Every day they supply us with the milk that becomes yoghurt, cream and much more, which you enjoy at breakfast at the marketplace every morning. Many of the ingredients we use in our restaurant come from our own farm. Among them fish, tender veal and pork, herbs, vegetables and seasonal highlights. 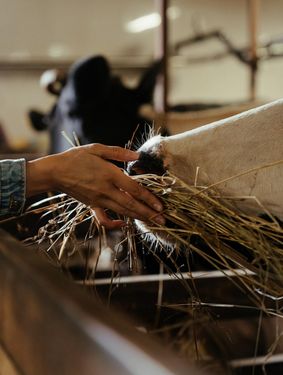 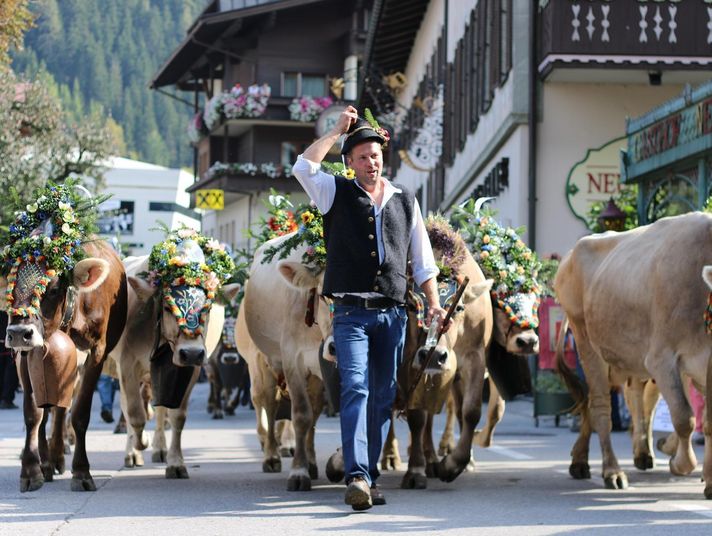 As a historically developed family business, we always have the future in mind. We want tomorrow's generations to be able to experience the natural wealth of the Zillertal Alps around our Resort Hotel Neuhaus in Mayrhofen as we do today. That is why we rely on renewable radiant energy with photovoltaics and solar thermal energy, on heat recovery in the laundry, in the ironing room and in the refrigeration technology.

Our goal is the completely self-sufficient generation of heating energy. With intensive flat roof greening with lavender, we want to support bees and promote biodiversity. At the same time, lavender fields store water, filter dust and noise and balance out temperature differences. Due to our proximity to the mountain cable car and excellent connections to the public transport network, the entire Zillertal is just a stone's throw away for you.

As one of the first hotels in Mayrhofen in the Zillertal, the Neuhaus has helped shape the region and grown in equal measure. Everywhere in our rooms and parlours you will find antiques, old farmer's boxes, works of art by Tyrolean painters from the 19th century that depict and reflect Tyrolean history. Walch, Defregger, Neppo, Weiler, Thiesner are just a few of the artists whose works you can admire here. In our traditional guest garden, background music ensures that you feel transported back in time on warm summer evenings – to a world of the Tyrol of yesteryear. Part of our tradition is also our agriculture, which we have been cultivating for many decades with a lot of heart and dedication. 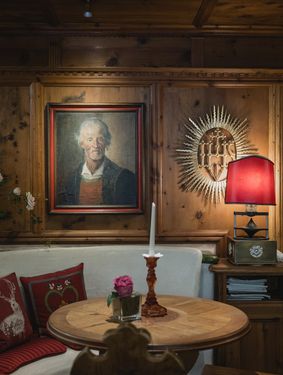 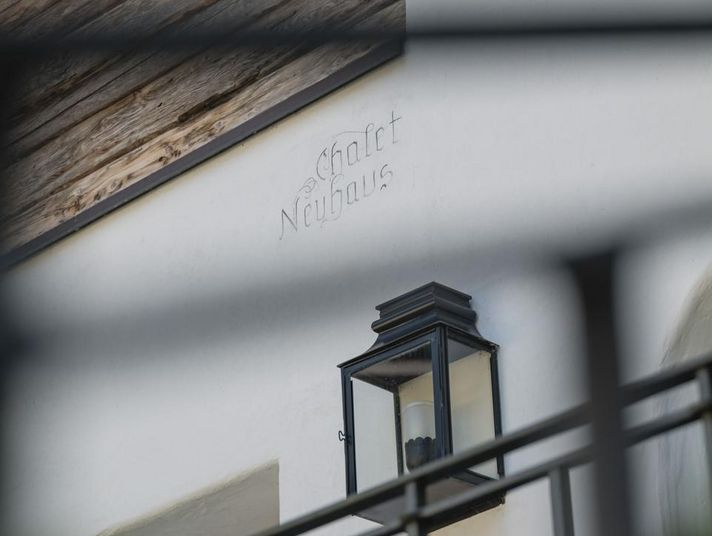 Rooted in the region. Dedicated to the future.

To pass on from generation to generation what we value and like. To preserve what is important to us and to maintain what we cannot be without. For us, this is a promise that applies to yesterday, today and tomorrow. That is why we run our family businesses, including our Adults Only Hotel ElisabethHotel and our Sissi Suite, with the same passion as our ancestors did back then. We welcome our guests with authentic cordiality and a genuine smile. That is why we make an effort every day to let the best ingredients grow and flourish for you on our alpine pastures and fields – so that you can enjoy the genuine taste of Tyrol & the Zillertal every day. We are aware of our responsibility and think about how we can become even more sustainable and environmentally friendly with every step we take towards the future. On your holiday with us, you accompany us on our journey and experience the whole diversity of the Zillertal Alps from a unique perspective.